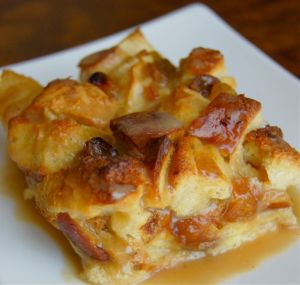 Preheat oven to 350*  In an 8-inch square pan, toast cubed bread in the middle of the oven until bread is crisp but not golden, about 5-7 minutes.  Mix melted butter in with bread, tossing to coat bread completely.  In a medium bowl, whisk together milk, cream, eggs, maple syrup, sugar, cinnamon, nutmeg, salt, and vanilla.  Pour over bread, stirring to coat.  Cover and chill pudding at least 1 1/2 hours.  Bake pudding in middle of oven until it just sets but still trembles slightly, about 50-55 minutes.  Serve warm or at room temperature.

Katy teaches private voice lessons through Covington Music Studio and authored the inaugural blog for the Atlanta Master Chorale from 2016-2017. Additionally, Katy floats the high notes in the soprano section of the University Musical Society Choral Union. She has been a choral and general music teacher for Farmington Public Schools in Farmington Hills, MI, served as Director of Children's Music at the First United Methodist Church in Ypsilanti, MI, performed at Magnolia in the Baldwin Theater production of "Show Boat" and is a proud recipient of a Bachelors of Music in Voice Performance and Music Education from the University of Michigan. When she's not singing, she's caring for her two young kiddos, hard-working husband, and crazy dog (let's be honest - she's usually singing then too...) She's been singing since before she could talk, and is thrilled to continue to her music career in the Detroit area.